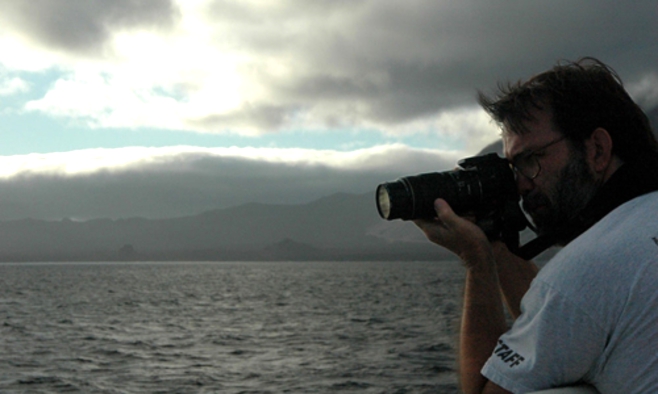 When I was about five years old I sent away cereal box tops to get my first functional camera (all plastic body, fixed lens, 127 roll film). I've had cameras of various sorts ever since.

In the fall of 1980 I took my first photography class (Photo 10, Introduction to Photography with Black & White Darkroom) at Los Angeles Valley Community College. The following semester I came back as a Darkroom Lab Assistant. Over the next 10 years I assisted in the darkroom, in the classroom, and occasionally substituted for one of the teachers, Dave Pavol.

My favorite subjects are people and animals. I prefer to shoot with available light so as to minimize my subject's awareness of my presence. Most of my work was done with 35mm gear but my portfolio does include images shot with 110 cartridge and 6x7cm formats as well.

In 2006 I traded in all of my film cameras and went totally digital. I chose to go all Canon. Having "grown up" with, primarily, Pentax film gear, "abandoning" both film and Pentax in one step was rather traumatic but it was the right decision for me. I got a Digital Rebel XT and I liked it (and its results) well enough that I went out and bought a second one.  Occasionally, I need to pack light and I found the Canon S3-IS does the job nicely. Much more recently, I added a Canon 70D to my collection.

Here are links to some of my Flickr photo albums: