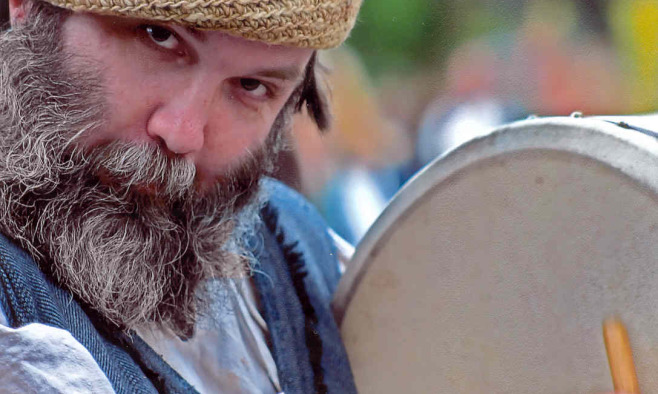 I went to my first dance class (ballet) when I was not quite two years old. In Junior High, I gave in to social pressures and stopped dancing. In college, I started up again. Over the years I've studied ballet, tap, ballroom, disco, and many kinds of American and International folk dancing. In recent years my emphasis has been on Irish and a bit of Scottish.

I've sung in church, community and school choirs since I was around 4 years old. I enjoy singing but I can't always trust my voice to do what I want it to do so I rarely sing in public in groups of less than 8-10 voices.

In 1983, I visited the Southern California Renaissance Pleasure Faire in Agoura Hills, California and I got "shanghaied" into working there. I've worked there every spring since then. At the Faire, amongst all of the oddly dressed people, there was one group that was more odd than most and they put on a really fun show of Scottish and Irish music and dancing. I was hooked immediately. The group is called Clan MacColin of Glenderry. Through them I was introduced to two more styles of dancing and I was introduced to Rhythm Bones and Bodhran. I've been dancing and/or playing in their dance shows (and many other places) for more than 30 years.

In 1985, I noticed one Faire weekend when many musicians were missing. The following weekend they were all back so I asked where they had gone. That's when I found out about the California Traditional Music Society and their annual "Summer Solstice Folk Dance, Music and Storytelling Festival". I went to the 1986 Festival as a paying customer and found out about the benefits of being a volunteer. After being a volunteer for a few years, I was invited to join the staff as a teacher and as Artistic Director - Small Instruments/Percussion. I've been teaching, co-teaching or assisting in bones, bodhran and spoons classes since 1987. I've also learned a bit of clave, doumbek and djembe at the Festival.

Over the years I've played in innumerable pub sets and jam sessions, mostly in Southern California. I've played concert gigs with everything from classical orchestra to heavy metal and mariachi bands.

Here are some relevant links:

Here are the handouts for my bones and bodhran workshops: